The cadaver is killing the CCP Demonrat Party! 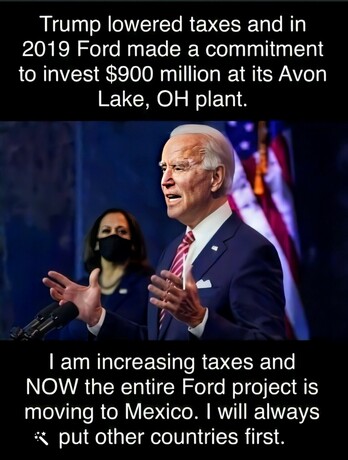 An international corporate tax agreement followed by all countries would prevent the lure of tax evasion by offshoring. That would ensure more jobs are kept local in a country from where they originate from.

America has been kicking their heels on this for some time because they are the ones that benefit the most from the current arrangement. (Or rather the richest 3% of Americans do).

Dimwit - do you understand what is happening here,    Chea p labor as against unionized labor in Ohio is just one reason.

Tax evasion + lower currency labour in another country are 2 factors motivating global corporates to outsource "more" of the operation.
that's in addition to necessary small operations of native sales and support for each respective country.

However, tax is arguably the main reason corporates outsource to other countries- because there are also disadvantages of using labour in another continent with language and time differences.
The problem is Americans see their famous global brand name companies making billions, but the average American is poor- when compared to places like the EU. (Not that the EU is exceptional either).
The richest 3% of Americans get richer every day, while the rest are getting poorer. These millionaires and billionaire are the people offshoring the jobs -not the government.
However, the government needs to work with the international community to end international tax evasion - by tax havens.
That is half the problem solved.
Cheaper labour of the same skill will still be an issue, but removing international tax evasion would vastly improve the situation for Americans- and other countries losing jobs as well.

If you think that the US Government  can do nothing about the issue you must be buts and ignorant, because Trump said they would charge punitive import taxes  on job migration projects,  He did exactly that to China and the  Democrats and media  as well as the huge corporations wated top have seizures..

Biden and Kamal Harris do not act  on anything  that could be policy related - their handlers and the big corporates would allow them to do,.     That agenda is written by corporate interests and especially China,   The Chinese despise them and told them to their faces that they are shit and Biden did nothing about it,    China knows Biden is corrupt and they know he is powerless and act on instruction - and that is where  the situation is being screwed up.

Do you think that the millions of voters now being newly impoverished  will not react  against their oppressors?     They will  and the that is why the Democrats  want voting without identification,  that would enable  them  to win anything like a democratic election by fraudulent means.

Recent studies on the 2020  election outcomes in audited areas showed  that thousands of envelopes representing 6.33% of votes cast - that was supposed to be the means of confirming of  identity of voters - do not exist  - so where did those votes come from?     How come in some areas there were more votes casted than there were registered  voters and even more registered  voters than the total population of the areas concerned?    They obviously are following the example set  by Father Stalin in what is important in elections and that relates to counting of votes and not the voting itself.   So the Democrats do not think they could be threatened  by a voter revolt and want to ensure that by voting without identification - in other words  winning  elections through voter fraud.   Goodbye  democracy - in the Socialist master class controlled by the extreme wealthy  would have taken over and establish a Socialist dictatorship,

It is not only tax evasion that could potentially be  outlawed  - but it would not mean any improvement for the ordinary voters from a financial perspective..   Government spending is often counter-productive  and inflationary and that means that families will be further impoverished through fruitless  expenditure.

Biden wants to tax major corporations  to cover the shortfall in state expenditure, but who would be the actual losers?   The major corporations  will just pass on the extra taxation to the consumers or fire workers to ensure they lose NOTHING,    The corporates know they will lose nothing - that is why they support the increase in taxation.   In the meantime  it would serve another purpose  - it would wipe out smaller marginal corporations as actual competitors against major corporations, - so the only people who will benefit is the already 3%  you referred to,.

Will the takeover of the US by major corporates in the name of Socialists last?    It could by massive voter fraud  and destruction of  democratic elections - but I doubt whether  it would work without another Civil War.

And you are welcoming that?

Mike that was a great post and and impossible to fault.

I must be imaging things but ou sharkie showed show understanding of the situation being discussed.

However how did the self serving elites go, could they possibl y have orchestrated this better: 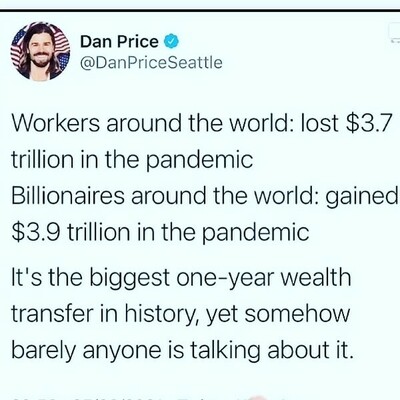