Apparently wanted to try her for her crimes. This type of stuff was never the norm for the US, but since Trump got involved things have gotten worse.

Here, this wraps up his passive approach to the rise of white supremacism,

" Amid a series of tweets questioning poll results and suggesting Biden will add seats to the U.S. Supreme Court if elected, which Biden himself has not confirmed, Trump claimed Barack Obama's presidency—when Biden served as vice president—were marked by "chaos, hatred & discord."

"People don't remember the chaos, hatred & discord that we all went through during the 8 years of Obama/Biden," Trump wrote on Twitter Sunday. "St. Louis, Oakland, Baltimore, and so many other places, were a complete & total disaster. I wouldn't be in the beautiful White House if it weren't for Sleepy Joe, etc."

His tweet seemed to reference protests that took place in each city mentioned during Obama's presidency after widely publicized police shootings that killed Michael Brown and Freddie Gray, two Black men, in Missouri and Maryland. Some protests that followed their deaths, and eventual decisions that failed to hold any police officers involved criminally accountable, became violent. Obama publicly denounced violence that occurred during the protests.

Trump faces ongoing criticism for his response to nationwide protests against police brutality and racism over the past four months, which has given rise to his re-election campaign advocating for "law and order." His failure to explicitly condemn white supremacists during the first presidential debate incited backlash and concern, among both Democrats and Republicans, about the ways in which Trump's rhetoric fuels white nationalism and violence by right-wing extremist groups. Members of such groups, like the Proud Boys organization Trump referenced during the debate, celebrated and pledged allegiance to the president in response to his comments.

Miles Taylor, the Department of Homeland Security's former chief of staff under Trump's administration, later said the president's comments about far-right violence throughout his term in office were "a loaded gun for these groups, who have since taken his words as a sort of permission to do what they're doing."

Critiques of Trump's militance toward anti-racism protesters, and comparatively passive response to right-wing extremism, are compounded by others related to his administration's handling of the coronavirus pandemic. As Trump continues to voice false statements about the disease, confirmed cases and deaths from the virus remain higher in the U.S. than anywhere else in the world. In April, Bill Gates described the state of coronavirus testing in the U.S. as "chaotic."

The CCTV footage of the assault and theft from the shop by the the lovely Michael Brown.

This was the incident that lead to cops seeking to arrest him.

Looking at how he assaults and intimidated the Indian store clerk, it's not too much of a stretch to believe that he would resist arrest and act violently towards police.

Perhaps Denny would like to comment on the events over the last few days where a far leftist shot and killed a Trump supporter.

Would be great to hear Kafala and Sleepy's comments.

While we are at it...Let's also review how the lefty msm covered the story.

Gosh, could it be that they're completely ignoring this incident and, in so doing, tacitly supporting this kind of violence.

Note how the rioting thugs that have now murdered numerous people in cold blood, bombed and committed arson in an unending list of federal and state crimes...are protesters. The same people with the stated goal of brining down the US government, which on its own is a crime.

They are only referred to as protesters. Not violent, criminal or extreme.

Miss me with this nonsense.


"His failure to explicitly condemn white supremacists during the first presidential debate incited backlash and concern, among both Democrats and Republicans, about the ways in which Trump's rhetoric fuels white nationalism and violence by right-wing extremist groups."

Here is a mash up video of Trump disavowing white supremacy, the KKK and David Duke.

And by way, VrotVis, you complete tool...it was antifA, IE far left commie cunts, that were arrested for the attempted kidnap.

Change the total of you post...you fake news spreading simpleton.

The silly little cowards quickly sang like birds once arrested, revealing the goal behind the plot...to start a civil war.

And here are the actual facts.

Seriously. How are you this lost?

Militias on standby as Trump warns of rigged election ...

So you sticking with them being far right?

Deliberate dishonesty and twisting things into an agenda that doesn't exist.

Normal for the Lefties to blame PDT for all than goes wrong in the USA but most if not all these criminal activities are supported due to Demorat Governors and Mayors not enforcing the law.

These officials without exception will do anything to politically harm the sitting President and score points for the "Bunker Blunder Biden".

Irrespective of the cost to the economy and life. 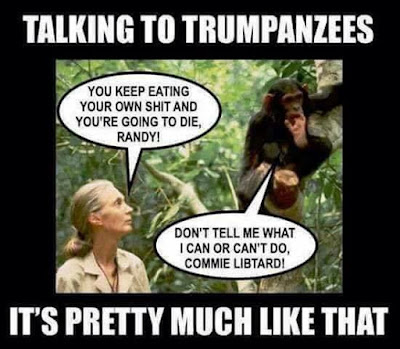 He always comes out when his other personality runs out of road.

In Plum's world police brutality is non existent.....not now....not ever.


"Deliberate dishonesty and twisting things into an agenda that doesn't exist."

Remember the mathematics class I gave you previously?

The one where I pointed out that even if you multiply the actual number of unarmed American people killed during 2019 police interactions by 100, the chance of being killed was still only 0.000057%?  And even less if you just obey cops and do as they ask.

So, possible, just extremely unlikely and not worth poisoning young kids minds with.

No worries, I accept your apology for lying about what I said.

Color me disappointed though.