We all should know the demonrats were the part of slavery and that their armed wing were the KKK.

Even fairly recently they showed their racist colours. 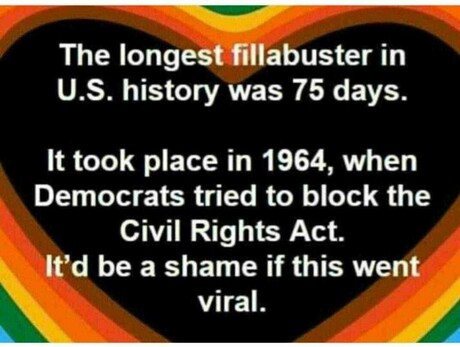 
The Democrats treat the ordinary Black voters like  shit  and concentrate their efforts to have a handful of Blacks an Hispanics in Congress and in the Administration.   Those Uncle Toms have been their showboats to show how strongly they support multi-racism.

In elections they use the poor Blacks to make  up the numbers for them and after that they just forget about them and if they are the poorest of the poor they give them food stamps to prevent starvation.    Education in State schools  are as bad as you will find in SA wih the result there is no upward mobility  for the Blacks

Over the last year the  media startyed accuse everyone not supporting the Democrats racists and in January  2020  the started BLM - always a subsidiary of the Party to cause havoc in US cities,     They and George  Soros started funding the BLM and brought in Antifa as well  to cause havoc,    The Flouyd incident was all they waited for to start   the well-organized and funded so-called protests that deteriorated into arson, riots and murders.    The whole objective was to  make the cities ungovernable and promised   the voters that they will restore oirder once in Government,   That has not happened yet and cities still have autinomous zomnes where law and order is non-existent/

The Democrats in fact are starting to undermine the Police since the Police are in the main not party spooks. - they want a Police Force like  the KGB used to be and the Chines Police are at present .   That force will have to ensure that any opposition to the Democrats are suitably  dealt with in accordance with party doctrine..    .   The defunding of the Police  is a step in that direction and the moral in the Police is at an all-time low.   A fairly large proportion are Blacks and Latino's - but even that is not enough to satisfy their needs.

The fact is that the Blacks are punished by the Democrats .as a result of their open border policy.   The new migrants will make inroads in lower paid jobs and will cause even greater Black unemployment that they used to encounter.   Make them dependent on the State - give them scraps and ensure that they support their oppressors is what the real aim of the Demorats will be removed   if they do not follow the Party in elections,