....the Economist published an article today hypothesizing that Bats from area like Vietnam, which carry many Corona viruses, may be ground zero for the disease. These animals could then end up in wet markets via the sophisticated trade in exotic species....or end up there via intermediate species that have been infected.

The theory hinges on possible immunity against the disease in bat infested countries like Vietnam......which went through a weak lockdown....but has only registered 417 cases and 0 deaths in a country of 100 million people. Most of South East Asia has spectacular results suggesting some sort of immunity is at play.

The theory goes that the virus had to travel to a non immune area like central China to really flair up.....another way of saying the wet markets should be more strictly policed or closed down.

These observations support other findings that exposure to these viruses confer immunity through T cells, and suggest there may be wider immunity than believed. It also suggests that herd immunity can build rapidly in a population, consistent with the low rates of infection we are now seeing in places like NY, Italy and Spain which were being ravaged by the virus 3 months ago.

This has been ascribed to distancing practices, but may have more to do with local immunity. Perhaps a reason why new areas are now the epicenter for the disease.

There is a lot we still have to learn about this virus and our 19th century epidemiologists are still stumped.

I recently read that bats were being considered an option for immunity as they seem to be riddled with Coronavirus.

The vaccine for Smallpox was discovered by an observation that milkmaids did not die from it.
Cowpox, also called vaccinia, mildly eruptive disease of cows that when transmitted to otherwise healthy humans produces immunity to smallpox. The cowpox virus is closely related to variola, the causative virus of smallpox.5 May 2020
So perhaps bat corona could help make people immune to Coronavirus. Let the bat immune system process it- and then test what is left on chimpanzees.
In the cases of cows, their immune system defeats the virus - and then when passed to humans it is the vaccine.
I do agree that the scientific approach so far has been slow and poor.
First, it took a while for all existing medicine and vaccines to be considered as options.
With Cowpox a natural vaccine to Smallpox, one of the first things to consider was to look at the bat where it was suspected of having originated.

We were lucky wigh smallpocks, but AIDS is still basically incurable after 40 years...Covid is luckily curable, so it should be much easier to treat it much more effectively than when it started spreading. 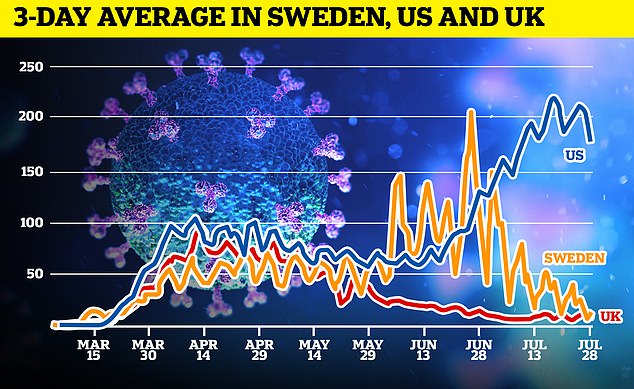 Florida still part of the US issue.... but 356086 of 461379 Florida cases are in Democratic counties......77% of all Florida cases. I’m fairly sure the numbers would be the same in other hot spot areas, California, Arizona and Texas...but it’s a pain doing the stats.

This doesn’t say Democrats are less competent, they are simply in urban areas. The virus ignores political distinctions and right now young people in cities are getting the disease...except where it has burned through like New York.

In Sweden with no lockdown Covid killed 0.002% of total population in people under 60.

From Reuters in May: In Sweden, the pandemic has caused around 3,700 deaths since the first reported fatality in March, but has not been as deadly as some seasonal flu over the last three decades, when the toll in December 1993 and January 2000 was higher, the Statistics Office said.

I still believe Covid is a vastly overstated threat. The old and the sick are at high risk as they are from most mild to serious diseases. The rest, minimal to no danger.

"but has not been as deadly as some seasonal flu over the last three decades,  when the toll in December 1993 and January 2000 was higher, the Statistics Office said.

I still believe Covid is a vastly overstated threat. The old and the sick are at high risk as they are from most mild to serious diseases. The rest, minimal to no danger."

It is serious but not as unique as they make it out to be. They gave it a name of it's own and hyped it as the realization of the zombie apocalypse! It is not serious enough to destroy the economy to try and stop it....I'm very angry at the fools in charge of this country acting like our overlords...worse than the previous regime...passively doing more harm than the Apartheid Regime did actively...

Partly our own fault Draad. Why the alcohol-industry didn't push back against this last ban by the government I don't know. The taxis pushed back and got what they wanted.

If we keep jumping when government snaps its fingers, we have to accept whatever harm that causes because we are willing participants.

True...we should start burning tyres in the street...wait for the extra sin tax to pay for all the Covid-Corruption.