Forum » Beenos Trumpet » The American Dream vs the American Nightmare

America is a deeply divided country, but not Red vs Blue.
It is the rural whites vs the Suburbs and City Dwellers.
If America does not fix this problem they could lose their Democracy to a life term Trump or worse. If Democracy is lost, it will not be long before capitalism declines in the US...

While Trump and his inner crowd live the American dream getting richer each day, the rural white American Trumper is living the American nightmare and getting poorer each day.
The rural white American is so disillusioned with the politics in the US whoever they vote for, they are just grasping for an alternative which happens to be Trump.
Jobs have declined in rural areas, with more people moving to cities and suburbs.
The rural Trumpanzee is less likely to be able to work from home than suburban and city dwellers. So the economy was a bigger factor than Coronavirus for them in terms of wages (e.g. food) than the risk of getting infected. The Maslow hierarchy of needs in action.
Trumps biggest supporters are mostly people totally disillusioned of America. They see a country with the highest GDP in the world, but "poorer" countries have higher earnings per capita. It is not working. They are frustrated. It is a nightmare that gets worse each night.
They are a communist mob who wants change- even if it means appointing Trump as a dictator for life. To hell with  Democracy or science. FIRE FAUCI. LOCK HIM UP. LOCK THEM ALL UP. CHANT CHANT.
They are scared of change, and going backwards could be better than any other change...
America is very divided. The American dream is being achieved at the expense of the poor, with a whole host of tax laws that allow someone like Trump to legally cheat tax.
It shows that capitalism is in need of an upgrade to make sure the richest people pay the most tax instead of the least tax. No loopholes for the rich to use BS like deferral of tax.
Trumpism, (American nationalism or even German socialist Nazism of working class superiority) is a product of the division within America.
When Trump is gone, the division will not be. The problem of rural voters getting more disenfranchised remains.
Biden did allude to this briefly in his speech after media declared him the mathematical winner:
Biden said that the disproportionality of votes for and against Trump showed that the rural area is a problem and clearly unhappy with Washington- and they need to be made happier. (e.g. more jobs).
It is no longer about red vs blue. It is not about race. It is rural vs city/suburbs...
Rural conservatives vs the bourgeoisie.

The Dems are selling American jobs to China. Chinese slave labour are being used to destroy the West...Trump's biggest legacy was trying to do something about it, but unfortunately for him, China's influence is much stronger than people realize...by the time the West wakes up, it might already be too late.

US companies make the choice if they want to employ people in the US or overseas.

The Democrats, however, have suggested a tariff on employment overseas to discourage the practices, or at least reduce it.
So the government will collect tax on overseas employees, just like US employees. This at least makes it fair.
However, it will not stop a global market from happening. Big companies will still like outsourcing as it is cheaper- unless it is made illegal to do so. Neither party has just suggested banning overseas employment by US companies.
If Trump had won the election, he would back the Corporates in whatever option to make the most profit and increase the stock market value.
Trump only likes the Trumpanzees because they have voting power, nothing else.
If Trump got a second term, he would have appointed himself for life, the Trumpanzzees would get poorer and poorer.

Childish nonsense  Shark.....the election was lost to the candidate who promised to give most to most people. Surprise! Actually it took:

2 The Justice Department and the Intelligence agencies.

3 The wealth of Soros and Tech.

5 The silence of Pfizer when they knew they had good news on a vaccine.

To defeat Donald by all of 2 or 3%. The fact that he was so close with all that opposition speaks to the strength of his message.

Trump's message is strong in rural America where he commands 95% of the vote.

It is not strong in the cities and Suburbans areas. Women in particular despise him in these areas.
There is great unhappiness in rural America. Also Black lives matter in the cities.
Pfizer's (and Biotech's) silence was unfortunate for Trump. However, this is down to Trump being Trump.
Trump initially tried to acquire BioTech so he could steal the vaccine and brand it is all American and ensure America had 100% of the supply.
BioTech is a Germany company and the main driver of this, with Pfizer in a subsidiary role.
The owner is German.
The German government got involved, and there was a dispute. Germany said that if Trumps wins a second election - they no longer see them as allies.
No wonder they(Pfizer and Biotech) did not want Government help...
Imagine Trump on your back phoning you up out of the blue.

Trump was trying to ensure supplies of this vaccine back in March....once again way before the bureaucrats realized it was important.

Trump aside, the problem remains. Rural Rednecks are not part of the American dream.

They are unhappy. Democracy is not working for them. They want something else.

The US is clearly a deeply divided nation, Biden has a huge job on his hands bringing it together. I'm not sure whether Donnie thrived on dividing the nation but divide he did under 4 years of turmoil with chaos and mayhem. The "Make America great again" mantra worked a treat in his first campaign but fell on it's face as same old, same old the second time round. The vast majority of voters have had enough and expressed themselves accordingly, the Trump era thankfully is gone forever. There will be No More Years of chaos, mayhem and unashamed efforts to divide a nation.

And Trump will do everything he can to make that transition as difficult as he can for Biden because that’s how he rolls.  If he cared about the American people like he says he does he would put them first.  This pandemic is sweeping the country killing a thousand people a day and he’s out playing golf or sitting on his butt tweeting or watching Fox News, which BTW seems to have backed away from his shenanigans, some decent people there after all.  He is nothing but a selfish, egotistical moron who cares nought about anyone but himself, his campaign was run on hate, division and unrest, to witness his foot-stamping and meltdowns is nothing new, he can’t even concede with grace.  If that’s the way he wants to go then the last vision we see of him will be leaving the WH in handcuffs.

Is this what you mean? Gotcha. 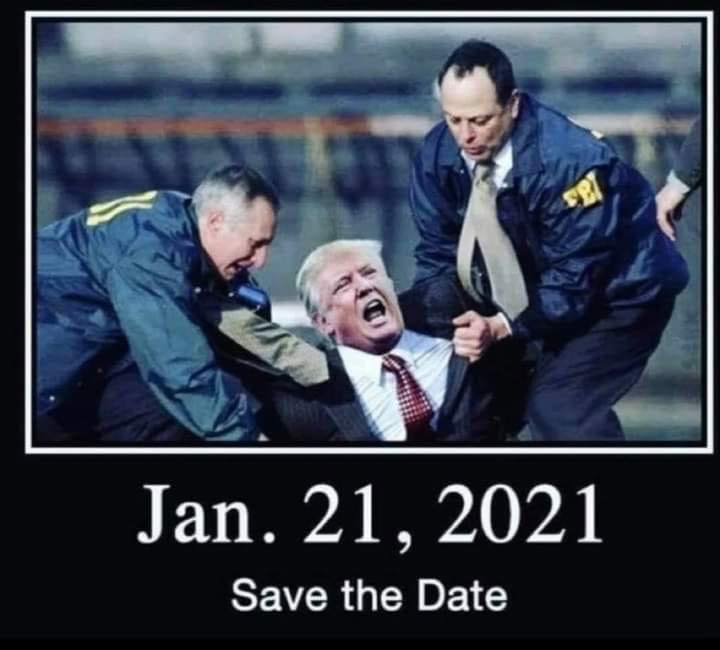 Exactly what I mean.