Former President Donald Trump continued his war against Ron DeSantis the day after the 2022 elections with more attacks on the Florida governor.

Trump mostly held back on his attacks against his possible 2024 challenger throughout the course of the election season, aside from calling him “Ron DeSanctimonious" the weekend before the election. But on Election Day, the gloves came of and Trump went on a full attack.

"Now that the Election in Florida is over, and everything went quite well, shouldn’t it be said that in 2020, I got 1.1 Million more votes in Florida than Ron D got this year, 5.7 Million to 4.6 Million? Just asking?" Trump posted on his personal social media account.

DeSantis hasn't declared he's running, but a moment at the gubernatorial debate led many to conclude that he's in. At one point, his Democratic challenger asked whether DeSantis would commit to filling out his last term. DeSantis refused.

Pundits have spent the day trashing Trump and the idea of the MAGA Republican leading the Republican Party because those candidates were more likely to fall on Tuesday. Still, Trump took a victory lap, taking credit for the wins in the House.

On Tuesday, Trump threatened DeSantis while speaking with Fox Digital, “I would tell you things about him that won’t be very flattering – I know more about him than anybody – other than, perhaps, his wife."

DeSantis hasn't weighed in on the attacks from Trump over the past few days.

Shows the lack of class and divisiveness of the narcissistic grunt.


Uncalled for from President Trump I agree.

Mrs Searle thinks she is funny. But I’ve seen better in a similar vein in primary school. Truly pathetic. 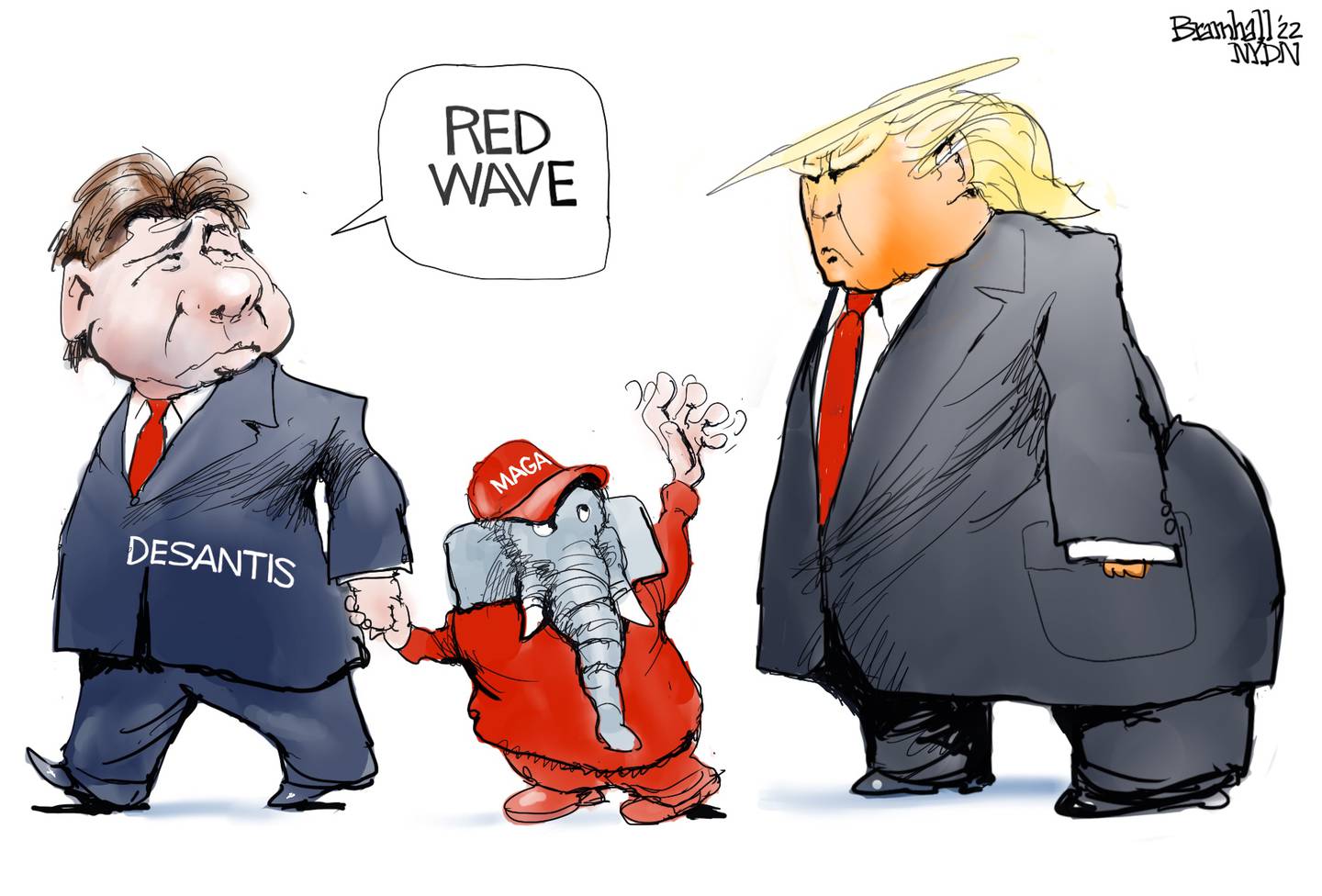 Just imagine the fun to be had if good old Donnie decides to throw his hat into the ring.......the press would love it, cartoons, jokes, and memes will flood the net again helping him stumble to another failed attempt. I hope he does. And just imagine if the Democrats had a real leader instead of a doddering and decrepit old coffin dodger.......wouldn't that drop kick the asshole into obscurity.

Think the Republican's are starting to realize that while backing Trump may get his support base to vote for him and the Republican's he appears to motivate as many voters to turn out and vote the other way.

Unless Biden has a much better second 2 years, I think the only person Biden could beat in the next election is Trump because of the anyone but Trump voter block. The Republicans could probably nominate anyone else to run for Presidency and get in.

Hope I see neither Trump nor Biden on the next ballot paper.

A person who has the country and its people in mind is required for the next Presidential election.

I plain words a PATRIOT.

Probably right Stav, but the conventional wisdom that with De Santis you get Trump without the aggression,  is wrong. De Santis has nothing like Trump’s experience in the economy. Nor is it likely a De Santis would have stopped the Fed from blowing up the economy in 2018, would have set seemingly unreasonable targets for vaccines, would have challenged China and dialogued with Noth Korea.

These are unconventional, almost maverick actions that only Trump would have taken. And they were all right. They needed a man who didn’t respect the status quo. De Santis is far more micro. Which is not to say he couldn’t be a good, more conventional President.

Unfortunately this mid term shows Trump has burned too many bridges. He has allied himself primarily with the nutter fringe….he will not get a vote from a definable 45% of the country. The January  occupation  completely alienated too many people ….it was dumb and despite many attempts voter fraud was never proven to be a factor. So he has squandered the opportunity for a come back.

Trump was on the wrong track in the debates and badly advised after the election. He had a war cabinet when there was 5% of the vote for him to claim if he could have just been tough but presidential. I’m sad to say Rudi Giuliani, a hero of 9/11 was partially responsible.

At the moment, the USA cannot get any worse, thanks to Biden and Harris.

Have you guys seen the incredible amount of footage of Harris, where she is asked a semi intellectual or intelligent question, on so many different occasions, relating to her direct job.....and she just stumbles and mumbles all over..... holy shit is that lady pathetic.

Biden has brought the USA to it's knees ..... he must be replaced..... but fuck me, can you imagine Harris having to take ov er as POTUS should something happen to Biden.... it is quite honestly a farce...

If Trump is not successful, and I seriously doubt he will be..... please elect someone other than Biden or Harris.... because never ever have I seen such an incompetent POTUS and Vice running and ruining the US.

I wish Trump departs from any political career and am supporting De Santis as the Republican Party candidate in 2024.

I wish Trump departs from any political career and am supporting De Santis as the Republican Party candidate in 2024.