Former President Donald Trump’s line of digital trading cards sold out in a day, netting millions despite the massive ongoing slump in nonfungible tokens and cryptocurrency and a fair bit of mocking from some of his allies.

….
The Donald continues embarrass his critics. I’m convinced the whole Ukrainian thing would never have happened if he was President, which would have reduced inflation, improved the markets and the world would be a much better place.
Choosing an out of touch old man like Biden has consequences.

Are you saying you bought the cards?

By the way, John Bolton, Trump's head National Security Advisor disagrees with your assessment. He says that authoritarianism worldwide became bolder during Trump's term, and they expected Trump to pull out of NATO in his 2nd term.

Bolton also says that if Trump was still in power, his friend Putin would have already conquered Ukraine and would be moving onto other targets.

How do you sell out of Digital products?

Apparently, Trump's pals in Russia bought much of the "stock".

Why did the Russians support Trump's election bid in 2016 and 2020? It is common knowledge that they were rooting for him.

So what? It wasn’t illegal as numerous investigations proved. So what if the Russians felt they could do business with Trump, that would have been a good thing. The Dems blew the Russian relationship time and again including at the Sochi Olympic Games, which were handled stupidly by Obama.

I never followed those investigations, but not sure if they proved or disproved anything. What we do know is that Trump and Putin seemed to get along very well - but Trump was a president like no other in US history.

The Donald continues embarrass his critics.

In this case, even his supporters are saying this was just embarrassing.

Right on cue the unctuous Trump hater emerges, failing to see the context…you are like a teenage girl Anger….petty and totally lacking any sense of fun.


Right on queue the gammon Trump acolyte emerges to defend the undefendable...oh I can assure you I have a sense of fun, I spent quite a long time laughing at how Trump just keeps making himself a bigger and bigger tit and laughing at how transparently desperate supporters like yourself are when you try to pass this off as anything other than just Trump plainly making a tool of himself, because if you allow yourself to admit that he did something stupid this time then maybe you might just to have reconsider all those other times you defended him when he did something equally stupid.

Right on ‘queue’ …..hahaha….please, for your own sake, say no more.

“ How do you sell out of Digital products? :D”

NFTs are limited and unique.


Oh, ButtPlug the pseudo-expert in Blockchain.... The same guy who was imploring everyone to buy crypto. Probably just blew his life savings buying Trump cards.

I must admit I thought NFT was related to baseball, not blockchain.

By the way, it appears that these cards may have copyright infringement and could therefore be worth less than nothing... The base images might have been taken from existing imagery artwork, superimposed and photoshopped with Trump...

Although if/when Trump goes to jail, who knows maybe these cards will actually become a collector's item- as a sick joke at Trump's expense. 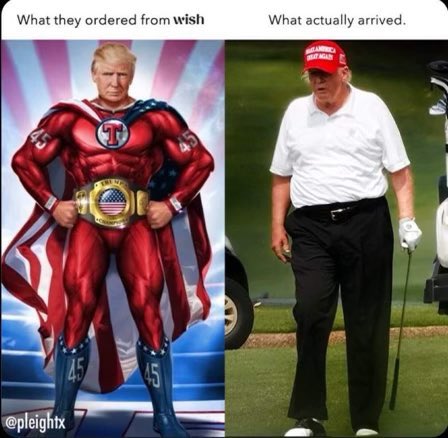 Trump just continues to outplay his critics….now they are desperately trying to find something wrong with the cards. Pretty soon we can expect a tedious cut and paste from the Quisling.

Trump just continues to outplay his critics….now they are desperately trying to find something wrong with the cards.

LOL, keep telling yourself that.

Well I guess when you think the correct spelling is ‘right on queue’ laughter is the only remaining tactic. The standard of education in Potatoland  is abysmal it seems.

Almost as abysmal as the lack of common sense over in Gunland. 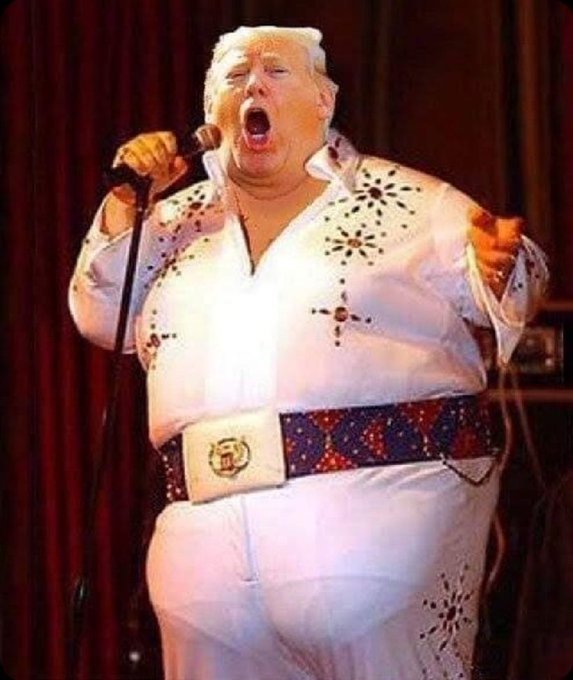 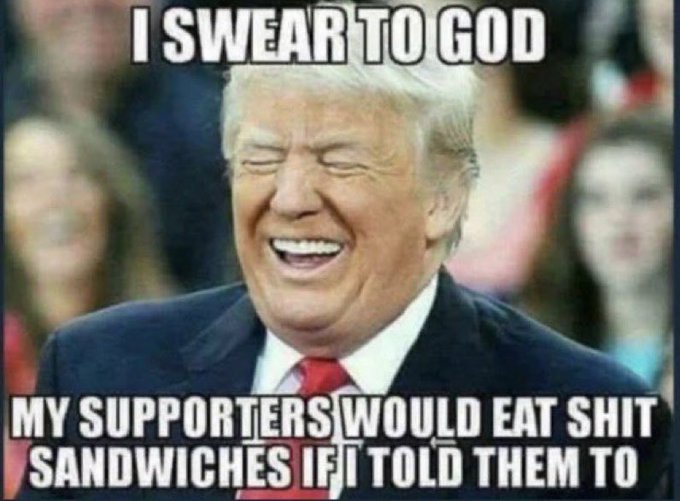 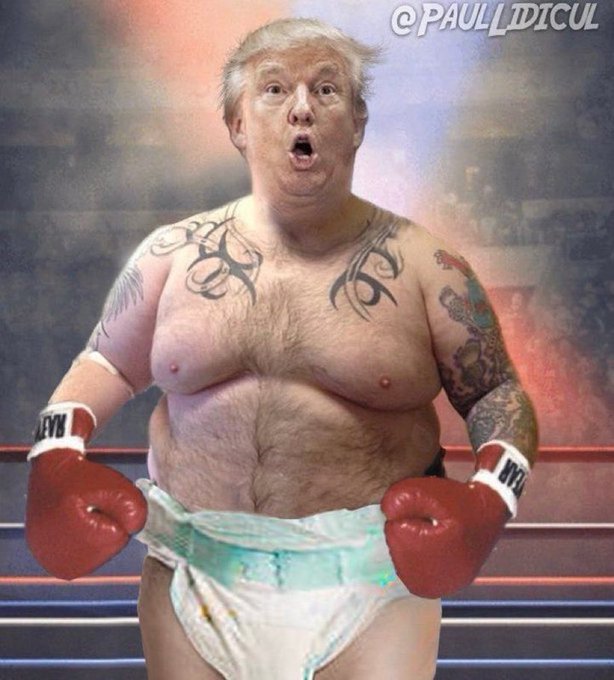 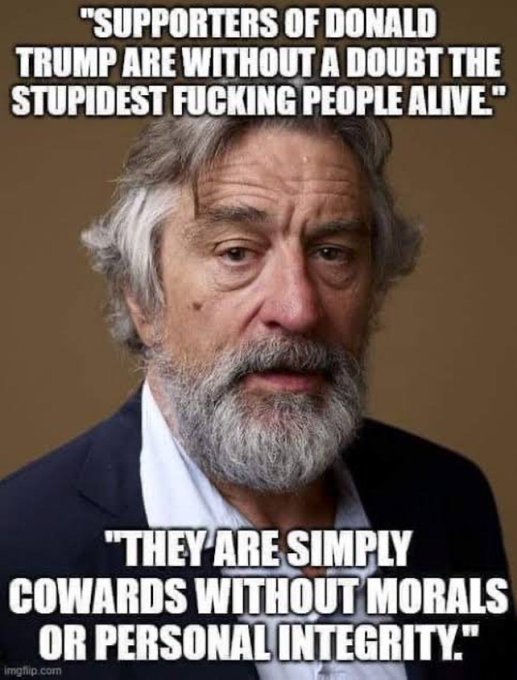 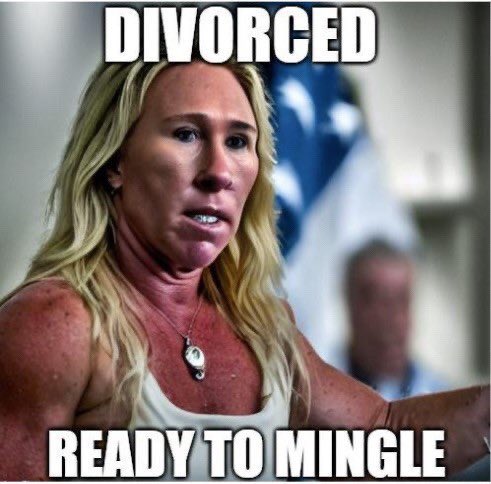 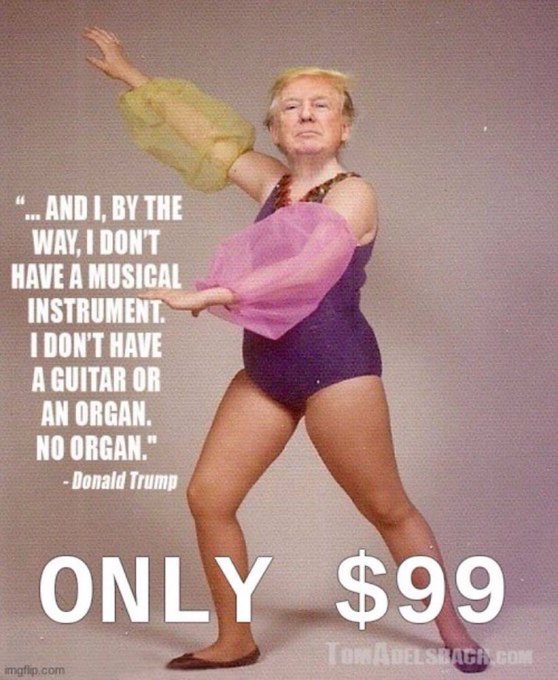 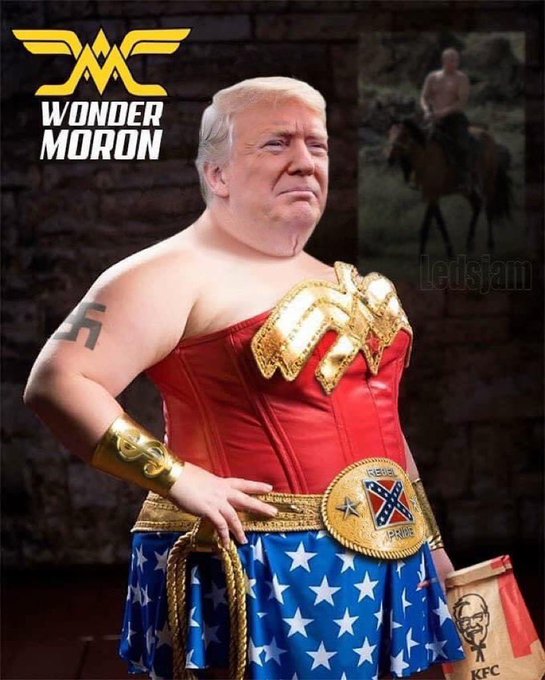 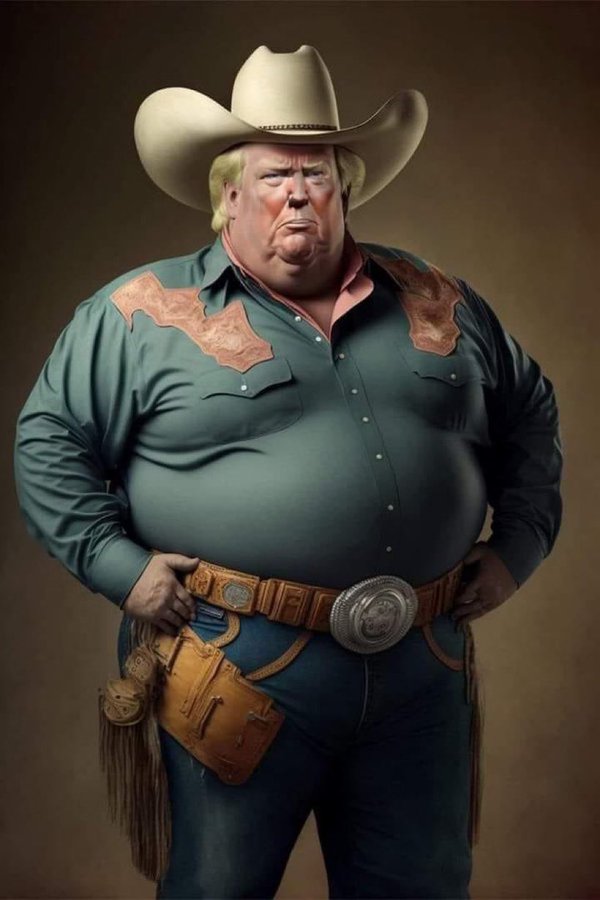 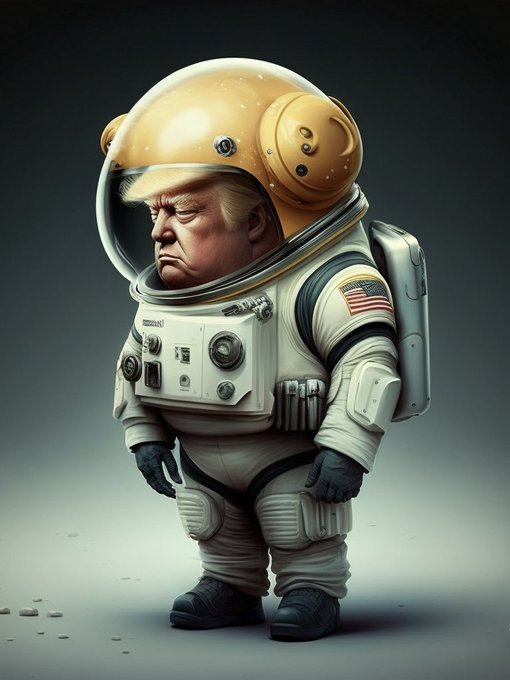 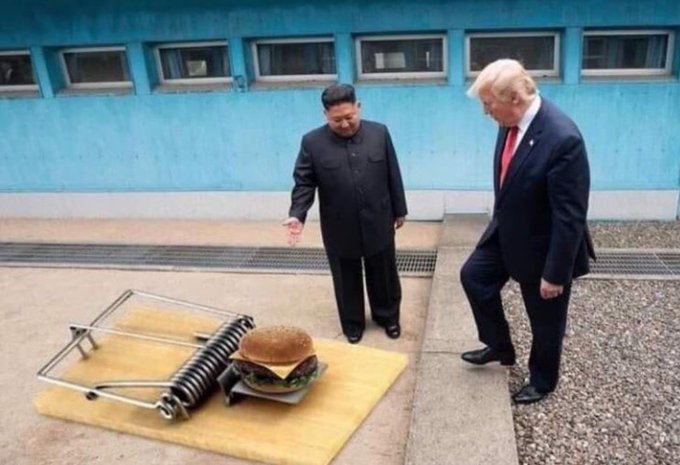 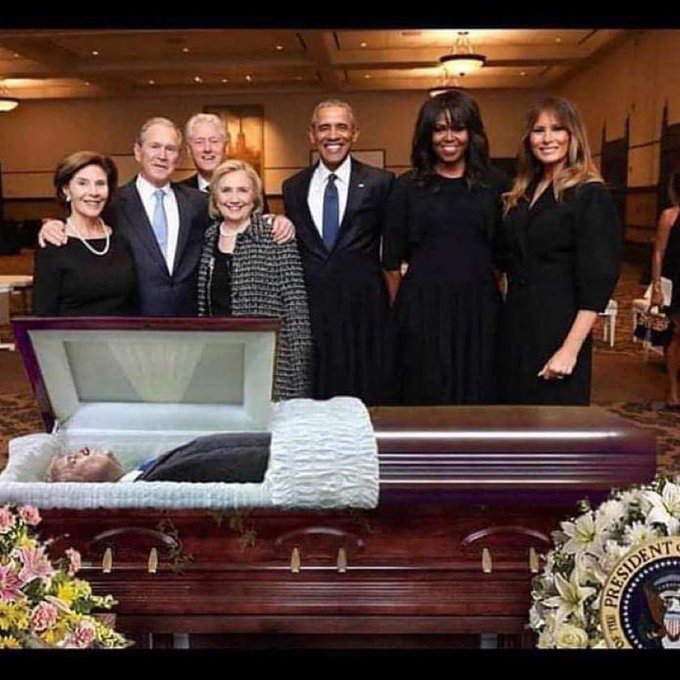 Pretty sure there are a lot of Trump supporters who would beat Robert de Sneero in an IQ contest….and I’m pretty sure his claimed height of 5’ 9” is a lie.

Funny that one for someone who has a low IQ his bank balance would be more than yours.

The fact Trump’s tongue in cheek NFT collection gets to you guys this severely is brilliant.

Have you even seen the cards? They’re meant to funny, and they are.

Dentsie, when are you launching your collection of race cards?

Soon Buttplug, you feature prominently on most of them......5'4" of you all tattooed and bald, dwarf like one might say........one of them has you as a cricket coach surrounded by 5yr olds. Investing in a soap box might have been a good one if not for an imaginary audience of retards.

Dense, if there's one thing I've learned, it's that there's no point trying to reason with someone who is so stupid that he still can't see through Bozo's phoney and self-serving sham.

A Trumpanzee will always be a Trumpanzee. That meme further up the page of Bozo bragging that his supporters would eat shit sandwiches if he told them to is 100% correct. Baboon-ou, Moffie and ou Maaik would be asking how much shit they need to spread.

Here's the story under the story.

Beta girls are never able to cope when they realise that they were lied to and that  the promises they relied on to validate themselves were almost as empty as their heads.

"Don't worry, Timmy. That boy might be popular now but in the future you're ship will come in, provided you do your homework and be a good boy. You'll see, people will respect you one day. You'll be more popular and respected than that silly boy that you're so worried about right now. Just be patient."

Lil Timmy grows up and just can't handle the severe butt hurt that occurs when he realises that those alphas are still alphas and he's still a little bitch that struggles to garner any respect."

Well, Timmy has his arse so firmly planted in the beta seat at this point that he's got nothing else but the beta playbook at his disposal.

And so, time after time, Timmy will shamelessly make use of the most obvious of beta plays that he can. His long-forsaken shame would give him pause but his will to fight his cause is greater. While it appears ridiculous to us, we should try to remember that Timmy is a fight for his life here...as pointless as it ultimately is.

So, when Trump makes a joke, a clear and obvious joke, lil beta Timmy will pull his hair out in disgust as he appeals to our sense of morality, writhing around on the floor in utter agony because the alpha's jokes hurt him so.

If only Timmy would realise that all he is doing is making the joke even funnier.

Thanks for your life story Buttpl . . . I mean Timmy!


That is Deep, ButtPlug. I underestimated your emotional intelligence.

Oh, by the way, did you remember to put the kettle in the fridge after using it?

Uh-oh True to form he's on his little soap box again. The fool must think I'm part of his imaginary audience. I mean who on earth is going to read his hogwash, it's so insignificant.

And if there's one thing I thank Trump for........he made it so much easier to choose my associates.

How many more times do we have to remind the BPlug not to attempt humor???....it's not his gig but he keeps trying. Imagine living with him.

They say it is not a cult. 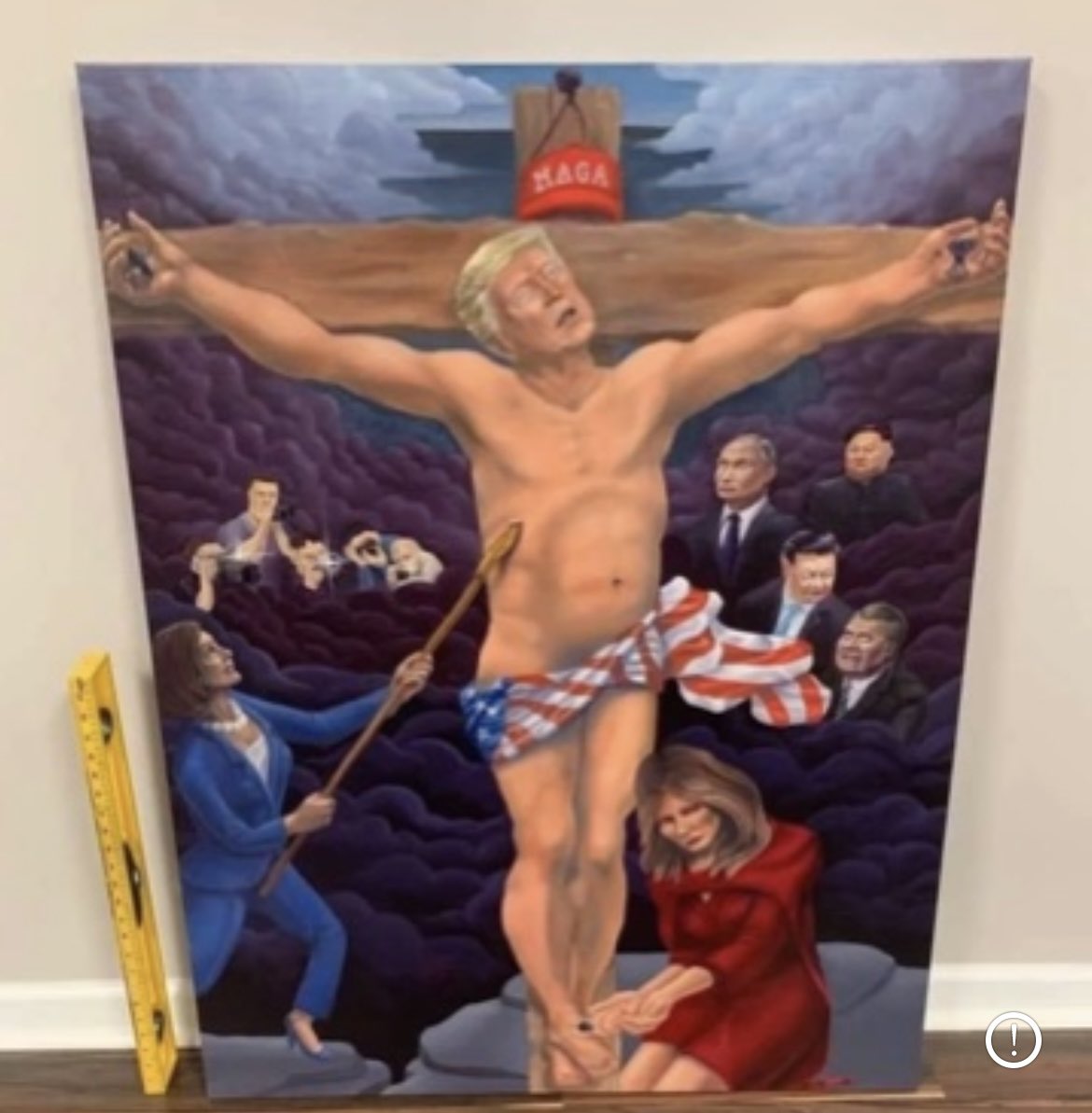 The beauty about using this cast of characters is they aren’t likely to ask for royalty rights.