"Sometimes" I go to my local town gym and do boxing for fitness, but not often enough.

Then recently I heard of Oculus Quest 2, and I bought the VR headset a few days ago.
I had not played video games properly since I was 12 years old when I grew out of it. But VR is different...

The boxing games are very realistic. Apparently, even some professional boxers use these games for practice. Not sure how effective it is for them compared to practising in a gym- but one thing is sure - it gives you one hell of a workout- maybe even more than doing boxing in a real gym for the same amount of time.

I can only imagine what the games will be like in 10-20 years, and how much VR will diversify into other areas.
It is a bit more games-focused at present, but other avenues could be to focus on training. For example, learning to drive a car in virtual reality could be the same as on the road - or even driving an aeroplane etc.

If you are looking for a fitness tool that you can do from your living room, highly recommended. Much more convenient than scheduling in time to go to the gym.

I've been playing Thrill of the Fight for about a year now. I go three rounds every afternoon when I get home from work. Lost 10kg and I'm feeling fitter than I have in decades. Just my arm muscles are always aching. I jab a lot!

Have you played Super Hot? If not it's worth buying. You have these red guys coming at you relentlessly the whole time trying to kill you with fists, knives, pistols, uzis and shotguns. You can pick up guns of your own or kill them with your fists but you have one major advantage . . . time only advances when you move. You can stand dead still and the red guys freeze. Even their bullets freeze as long as you don't move a muscle so you can dodge bullets by bending or arching out of the way in slow motion . . . a bit like Neo in the Matrix movies. It's also a pretty good workout.

@Rooineck - Yes, it is unbelievably tiring, such good exercise. I want to get into the habit of playing once per day.

As I am getting better I can knock opponents out with a right hook faster, so I am trying harder modes, so should be able to burn calories faster with a higher tempo fight.

I just played Creed for the 1st time today, and accidentally stood outside the play area and punched a cupboard - so enough for today.
In Creed the opponent moves around more stepping in and out, so I am still getting used to it.
It would like to test a ring-sized room as a play area with Creed to move around more.

Apparently, the earlier versions of Creed were not very good, but it has improved to the stage it is competing with Thrill of the Fight.

I will check out Super Hot.

Nice to hear that you two knuckleheads are keeping healthy.

What frame rates do you get? Looks like it maxes out at 120.

ButtPlug's avatar actually looks like one of the Thrill of the Fight boxers . . . Ugly Joe. I do sometimes imagine I'm smacking ButtPlug around when I fight him.

Harsh....cut the wee Plug some slack as usual he's only looking for a bit of attention. Bwhahahahaha

I wonder, did you make this Reddit post? Is it only me that notices the similarity between what I do to you here and what my avatar does to you in that game?

I'm glad that I motivate you to train. But the truth is you're too old, too fat, and have neglected yourself for far too long to be any sort of competition for me. Keep trucking though...slug-ger!

Hey everyone! I've been playing thrill of the fight for about a month now, and have seriously enjoyed it thus far! I've managed to beat moneymaker on endurance (with 1.4x punch multiplier and drift protection off) and everyone else (except ugly joe) on outclassed. However, my true final boss seems to be the second darn fighter in the game's progression. HE JUST DOESN'T GO DOWN. IT'S LIKE PUNCHING A BRICK WALL. AND HE HITS LIKE A TRUCK TOO!! THIS MAN IS HAUNTING MY DREAMS, EVERY TIME I CLOSE MY EYES I SEE HIS HIDEOUS FACE!!!!

I can't even beat him on endurance. I've even put my punch multiplier on 5x, turned off drift protection, and went HAM on him, but he just didn't go down! I hit him 300 times in 2 rounds for 650k total damage on 5x punch multiplier, and I didn't even get an orange hit on him!! He never went down! He then proceeded to knock me out, with a total of 10 hits that did ~30k damage. Now how is that fair? He's harder than moneymaker for lord's sake! I just can't seem to defeat him. Can anyone help?" 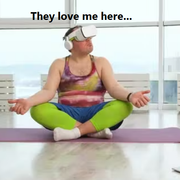 Who is that avatar of actually?

That is ButtPlug (not the one in the tights) ... At first, I thought it was a cross in the background of a crucifixion scene

nobody answered my frame rate question…

"nobody answered my frame rate question…"

Always have to read between the lines with you, RooiTIT!

By "C.H.U.M.P, you mean Cherish His Utterly Marvelous Presence, right?

"Always have to read between the lines with you, RooiTIT!"

Oh? Was I not clear enough for you? Basically I'm pointing out that you had enough info to Google your answer so quite why you're getting tearful and feeling all sorry for yourself because no-one had answered your question is beyond me. Maybe it's a Meton thing.

"By "C.H.U.M.P, you mean Cherish His Utterly Marvelous Presence, right?"

I'm pretty sure I speak for every poster when I say we don't really care what you think. Ever.

I take it the world appears rather bleak and depressing through those bloodshot and angry little eyes?


...I think that's how Rooi actually lost the 10KGs

Which VR unit are you guys using, is there a reputable one that is better than the rest?

Unless there is another one that you guys are using....