Mallett's comments on the Japan test

The following from News24:-

"Former Springbok coach Nick Mallett was impressed with South Africa's efforts in their win over Japan in Saitama on Friday.

The Springboks won 41-7, having led 22-0 at half-time in the Rugby World Cup warm-up match.

Mallett commented on the game in the SuperSport studio and said he was more impressed by South Africa's efforts in the first half.

"We said before kick-off the way to play this game was to play territory, have a controlled kicking game and good set piece and to not break it into a touch rugby game," Mallett said.

"And in the first half that was exactly what they did. South Africa scored tries confidently from two set-piece moves and also a turnover to lead 22-0. The second half was a little bit scrappier and loose with the replacements coming on. So there was an against-the-run-of-play try for Japan, which proved what they can do if a game loosens up."

The game was more open in the second period and the Boks were under the cosh defensively for large parts, but showed grit in the way their defended their line.

Mallett added: "Ironically, the Springboks scored two tries when they were down to 14 players and that shows the heart and the competitive edge that this team has developed. They don't like losing and they don’t like conceding tries.

"It was just a good performance. I thought a 20-point win would be good and they were appreciably well over that mark. There's a calmness about this Bok team and there's so much talking and communication both on attack and defence that hasn’t been there over the past few seasons. So it is all very positive."

With the win, the Springboks also buried the ghosts of Brighton where they suffered a shock 34-32 defeat to Japan during the 2015 World Cup.

South Africa's next encounter is their Rugby World Cup opener against New Zealand in Yokohama on September 21."

The above is clearly logical comments on the game.   It must be noted that 2  of the 8 replacements were dead losses:-

*   Steyn at flyhalf was a disaster who buggered up backline play 100% and gifted a try to the Japanese by a wild and poor pass; and
*   Louw always a danger of being penalized  when it comes to turnover balls at breakdowns - he is routinely penalized in such cases and give away as many penalties as he makes turnovers - was on the field for five minutes, tried to make an illegal turnover, was yellow carded and did not play for the rest of the game.
The three site "experts" were curiously silent on the actual performances of players and the bugger-ups of Steyn and Louw was never really mentioned on site - bar Pakie who made a remark to question what happened at the breakdown leading to the Louw yellow card.
The only real discussion was the normal BS Mozart and AO came up with and that relates to the disastrous performance by the Springboks in the 2015 WC test,  Logic went out of the window to protect Meyer and the goats he selected for the game.   As per normal the Idiot Speakers concentrated their attacks on Du Toit, De Jager and Kriel and tried to protect the real BS by other players, as well as discussion of Meyer's own role with the BS he used in the game as a "game plan" .
When will they ever learn anything about rugby?

Mostert is the glue that holds the team together. Nice to see Frans as a 10 sub, good insight by Eraser

Pity we seem to be stuck with Dud Allende!

And the fuck-ups of Steyn count for nothing? Himmell - total rugby ignorance and prejudice combined in disastrous remarks.   Idiots will  never learn.

Muck you simply can’t see what Eraser and I have been saying. Best just trust that it’s the best solution. No doubt Eraser will be seeing the DudToit issue soon, but will he have the courage to act?

There is no issue with Du Toit other than your constant Idiot Speak about the player,   Erasmus definitely saw on Friday how piss poor Steyn was in whatever he was doing and how the play deteriorated in the second half when he came on.   So to play him a flyhalf or center is a dead loss. Two players ran past near him and he did not even attempt to tackle them.

Ah the old Muck missed tackle that doesn't show in the stats.

I've never been a Mostert fan but on Saturday he was pretty damn good.

Open your eyes for a change and do deal with reality.

ZERO mention of the ONLY player singled out by NM after the game as having "been able to make better decisions". The poor quality of the decision was even elaborated upon through telestration.

Specifically Mallet mentioned how DDA, with Mapimpi outside him, and only one defender in front of them, covering DDA...DDA chooses to kick instead of passing to Mapimpi for a certain try.

If one omits the biggest point NM made after the game, then don't expect to be taken seriously.

And certainly never mention of the unforced penalty that broke momentum from a try scoring opportunity for the books.

This is before we arrive at the 4 knockons by DDA.

Instead, let's discuss Flow, that was sent of as a consequence of cumulative penalties from his team before he was even on the field.

Instead let's discuss Steyn after a pass he made bounced off of AM for the luckiest try Japan will score this year.

DDA was easily the worst player on the field. Nobody made more mistakes or broke more of their own team's momentum. Not even anyone on the Japan team, and they lost by 34 points.

DDA Has had his chance. He simply is not test material. Too many of his decisions and too much of his execution fall well below what is required.

Thanks for the voice of reason, Plum.

Nothing spectacular, but nothing atrocious either - made his tackles, kicked his touches, kept us in the Japan half.

Steyn had Labuschagne nailed.  Blaas my siel.  LMAO.  The above descriptions shows a passing  FU leading to a Japanese try, three BS kicks - none of them of any value and an additional tackle only you discovered - new n ame Comey the serial liar.

Steyn made 2 tackles - average 1 every 10 minutes.

Steyn made 1 wild pass and gave away a try.

De Allende and Du Toit each made a really good pass leading to a Mapimpi try.

Steyn failed - De Allende did not

The three tackles are crystal clear. Watch the video. The time stamps make it easy. Or carry on with your infantile name calling, whatever floats your boat.

The tackle of Labuschagne was never counted for Steyn.  Labuschagne slowed down because Steyn was in front of him - allowing Mostert to catch up and made the tackle.   If it was not for Mostert Labiushagne would have broken any tackle attempt and scored a try.   As it was Steyn was on the ground behind where Labuschagne landed.

Keep it up stupid.

And so the tedious back and forth starts because you just can't look honestly at any situation.

As it was Steyn was on the ground behind where Labuschagne landed.

Nope, here you can see Lappies going down with Steyn's arm still firmly wrapped around him in a tackle. 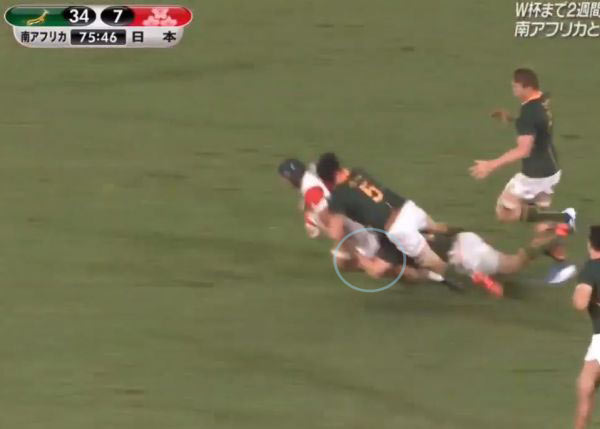 And here the tackle is completed with Steyn still attached to Lappies, exactly where you would expect a tackler having a guy by the legs to be. 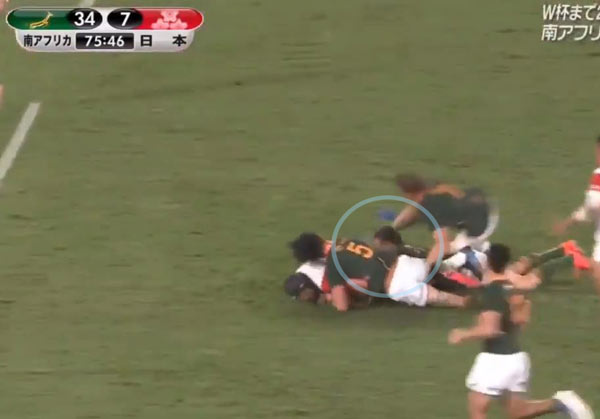 But hey, you believe what you want to believe. Sometimes I just enjoy having the evidence speak and make you look like a fool.

The interpretation you wish to make as standard BS is your norm Comey.   You are welcome to believe the BS you spout.

Why do you even bother?

What a laugh - you lied you ass off and I LMAO.

What a laugh - you lied you ass off and I LMAO.

Lügnerin. You are beginning to sound more and more like Netty from The Colour Purple. Please improve your English. Thanking you in advance.

Love it, fresh and creative besides being hilarious....tx for the laugh.

My English is bad - your rugby knowledge is non-existent,   On a site like this we can do without the lies and  distorting associated with Strzok, Comey and yourself.  LMAO