The following is interesting:-

Check out this comprehensive list of English Premiership player transfers involving South Africans ahead of the 2020-21 season.

The following are retirees

When Ackerman Was appointed by Gloucester he took the  most of the above players with him from the Lions.   Because of Ackerman's departure most of the players are released from their contracts.   Tht leaves a question mark as to the performance of the players now released with Ackerman.

The interesting name amongst the released players  is Franco Mostert,   Seems that he as a WC winning Springbok would have been retained by the Club at all costs - but according to the English commentators in the WC Final - he is not really rated highly in England  whether playing at lock or as a 7.

A number of players has been release without getting a contract elsewhere.   Amongst those are Pat Cilliers and Michael Roberts.   Both are probably pass their sell-by date even though Mozart punted Michael Roberts as a potential Springbok loosie.

Some players just did not make the grade - included Franco van der Merwe and  EW Viljoen,.

Having some trouble with your movements Tokkie?

When it comes to producing second-rows, there are few countries in the world with a better track record than South Africa. Mostert is the latest in a long line of talented players, however he is different to the likes of Eben Etzebeth. Etzebeth and others rely on their size, but Mostert is not the biggest when it comes to locks — as pointed out by Munster coach Johann van Graan this week. Van Graan knows Mostert from his time working with South Africa and as such, he knows how much of a threat he will pose tonight at Kingsholm.

The 28-year-old is excellent in the line-out, both at ensuring his own ball is won and stealing others. Indeed, during the 2018 Super Rugby season, he won 87 line-outs — 25 more than any other player.

However, it is Mostert’s work-rate that sets him apart from others. He may not be the biggest but he is a willing carrier and he weighed in with 163 for the Lions last season (the 10th-highest in Super Rugby).

Defence, though, is where the second-row’s work-ethic really shines through. He is one of the best tacklers in the modern game and he unsurprisingly topped the charts for that in Super Rugby last season. His tally of 234 was also 25 more than the next-best player.

Well - Mostert is off  to Japan and we will not see him in a green jersey again.

If you recall some of the selections at flank, #8 and lock were nothing but selections to meet government sporting policies and degrade the standard of the national rugby team in return.

But he did what was best for him and he signed for Sarries and had many excellent games for that club.

Excellent team and rugby player in my opinion.

What else did one expect from Meyer as a selector - he picked players that were useless and left out players like Rhodes.  Remember the selection of Alberts  in the 2015 WC squad when he played no matches for 14 months and could not be used in the WC at all.   That was the the type of thing that cost Meyer to lose his job with Stade Francais,

I would add to the wrong country/wrong time/clueless coach added to the Mozart description.

What else did one expect from Meyer as a selector - he picked players that were useless and left out players like Rhodes.  Remember the selection of Alberts  in the 2015 WC squad when he played no matches for 14 months and could not be used in the WC at all.   That was the the type of thing that cost Meyer to lose his job with Stade Francais,

I would add to the wrong country/wrong time/clueless coach added to the Mozart description.

He took a gamble on Alberts because no other player could replicate his dominance in the time that he was injured. He tried Coetzee, Juan and even the Steph who was felled by Japan. It didn't work out, but it was by no means stupid. Alberts was a key member of the most powerful Bok side from 2009 till present day.

BS - Nobody is supposed to take a chance on a player that was clearly unfit and not ready to play.  There were ample other players available - he could have pi cked either Rhodes of Labuschagne - both were better players than Alberts anyway,   Alberts never was a key member of anything  and probably the worst selection imaginable - Alberts at the time was already 31 years old and way past his best as a player.   Nobody in his right mind would pick a player like that for a WC squad,  By the way the eminent retirees like Bismarck, Pienaar, De Villiers, Matfield  and Burger fucked up royally in the Japan test and the fool was forced to play Du Toit for the first time in more than 3 years as a loosie because Alberts was unplayable.

Meyer got fired by Stade Francais because he was unable to select players with a limitless available budget.  The first thing he should have done was to get rid of Morne and Alberts anyway.  They were both useless and he should have gone on a contracting spree with top real players,   Anyway - it was proven when he coached the Springboks and Stade Francais that Meyer had no idea about selection and he also struggled with no game plan of which there wqs no evident proof that such a plan actually existed.

No they were not. We simply didn't have another player who could replicate that dominance. And yes, you do include a player like that in the squad if you think he might be able to do something for you. Remember, he didn't have him as a key starter at any point in 2015. Once again, you exaggerate to lie. You are a liar, you are well known for lying. You have no character.

There was no dominance of anything when it came to Alberts for years and the dominance were in your besotted mind anyway,   That is the long and the short of the matter.    A loosie Alberts never was anyway, 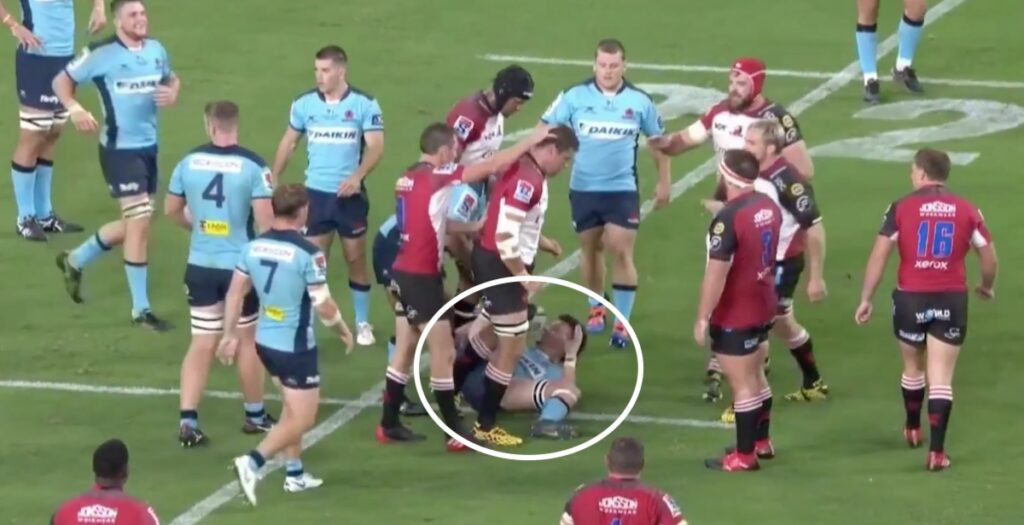 The 120kg lock picked up the nickname The Bone Collector for his brutal tackles and this one on Dempsey had the entire crowd on their feet in Sydney.

That must have been in 2009 and it obviously was in traffic - he could not mad e an open field tackle to save his life.   That is one of the reasons he should never have been used as a loosie - the other was ball protection and recovery - he was to slow in pace to get to breakdowns,

He should have played as a prop - he would have been a slow one as well - or sometimes he did play at lock  but he was too clumsy to be any good in line-outs,

He did not meet 90%  of the requirements of a loosie.

You talk about newspaper hype - that story about bonecrusher was typical - so please look at what he could have done as a loosie and was unable to do,

Nobody in his right mind would pick players that did not play for 14 months before the WC in 2015 - he never produced anything in the WC and was a passenger enjoying a holiday in England.

"He could not made an open field tackle to save his life."

That's actually quite funny, because it is Lood who requires shoulder-to-shoulder support to be able to apply head-on pressure, such as the Scotland test of the 2015 WC, where the gameplan was to use an arrowhead formation in the middle of the field to disrupt their patterns and flush them out to the tramlines. Lood looked best in that first half, before the Scots began to expose our scrum when Malherbe came on and started to find some space. You always are what you accuse others of being, and those players you attack always exhibit the qualities you give to the chaff. I believe that the only reason why you support those mediocre players is because you see yourself in them; in your mind, you are still fighting that battle for recognition.

Malherbe did very well in Japan and that is a fact you in your total refusal to recognize that the Springboks won the WC trophy in 2019 is evident.

Are you talking about the 2015 Scotland test when Jannie started the game and got yellow-carded?   By 2015 Jannie was poor in all games played  as was the Springbok team coached by Meyer,

Malherbe ws very good later in the tournament, he was a nonentity against New Zealand and earlier in the season. Why, I don't know. He was actually rather poor in 2015. When he came on, the Scots were bullying our scrum, which took away good attacking opportunities.

Total refusal? Where did I say the Boks didn't win the World Cup? I challenge you old boy. You are a big hall of irrational and thoughtless emotion. You are once more cornering yourself.

Spot the difference? Nobody else has gone into greater depth on each Bok season from Meyer to Rassie. Only a total fool would continually challenge me on that. It is irrefutable that Meyer was the better coach and that your golden boys were nothing. This has been covered to death, and quite frankly I am sick of having to repost the same information.

The Springboks won the WC - but the amount of unfounded attacks  you wrote about the coach, the team and individual players as limitless - so what must one assume of that idiocy on your part.   You were such a coward you were absent from the site for a while and then the attacks started,

The Scots never was in the game in 2015 and the bullying of the Scots of the Springbok scrum was as per normal baloney invented by you.   The Scots lost the game 34-16 and never really was dominating anything - the scrims never in the 41 minutes when Malherbe played/  Jannie was the weak link he went off in minute 33 and as off till minute 44.   Most of the points scored by the Springboks was when Malherbe was in and Jannie out, while most of the Scottish points were scored when Du Plessis was on,   So try again.

As to your stupid misunderstanding of the game plan of Erasmus and total idiocy on what really counts in rugby - namely scoring of tries and points and winning games consequently- you are so childish in what you call analysis is really just a joke in bad taste.   So let me explain something further:-

Those are the key reasons why the Springboks were doomed in 2015,   They were extremely weak in the tryscoring scenario and as bad in defense,

Start from there and see what you get.


Unfounded? Every word has been a fact, irrefutable fact. You have failed at every turn and humiliated yourself in your persistence to espouse lies and errancy. In fact, there is nothing for me to say to you. I'm bored of the same tired lies and arguments and childish behaviour. From here on out, you get nothing more from me. Ende.

Facts are games and trophies won and points scored for and against.  The moment your mumbo-jumbo ignored those it consequently  is total garbage,

I did not lie about the two factors  mentioned,  By the way you quack on about lies because you do not like facts.

Is there a South African player still having movements in English clubs?