I found it a bit weird to be supporting the Bulls and the Stormers on consecutive days but once I got over the strangeness of it I was well rewarded. Both sides showed a lot of character and it was a great weekend for South African rugby.

If I had to pick out any individual this weekend top of my list would be Marcell Coetzee's performance and his captaincy. He is a warrior and he led his team by example. Glad to see he got a well-deserved call-up to the Springbok squad.

The forward pass that resulted in Balancoune's try for Ulster against the Stormers was blatant and I'm amazed the TMO let it go.

I haven't watched a replay of that final kick by Libbock but I was convinced he'd missed it to the right of the upright and I saw at least two Ulster players asking the ref to check it. I must be mistaken because I'm not seeing any talk about it . . . did anyone else think the same? Libbock's kicking up until then was very poor but his general play was good (as it's been all season) and he might feel a bit aggrieved to be overlooked for Rassie's squad . . . especially considering Elton Jantjies made it.

If I was a rugby coach and one of my players botched a try like Canan Moodie did, I'd be telling him that if he ever tries to show off like that again instead of planting the ball down he'll never play for my side again. Moodie is very lucky that the Bulls scored soon afterwards anyway. Trying to make the try look spectacular in a semi-final like that is unforgivable.

That was definitely a forward pass and it did look like libbok missed that kick....maybe it was just the angle of the camera, but it did look like that....saw one Ulster player asking...The ref was not that good because Adre' Smith, s red card was also a mistake ...not deliberate....but ok otherwise I think Stormers deserved to win....Rookie mistake from Moodie and I think he will hold the ball with both hands from now on going in for the try ....Marcelle is really playing so well and he thoroughly deserve it and the other players to....bit unhappy that Wilco Louw is not there he is in good form overseas and a monster scrum Machine...just hope all the new caps get game time.

My first impression was also that the kick missed. But, it went very high and crossed the goal line while still above the highest point of the goal posts. Looking again carefully you can see it is already past the right post the moment it first drops back to that level (see image below), so taking into account the camera angle the kick seems good. 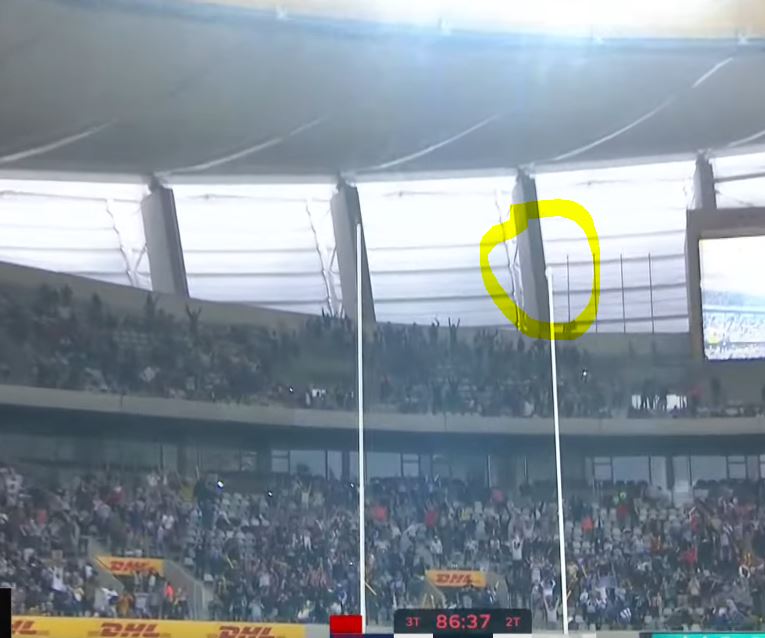 Good pic Pakie....if it missed, the ball would have been to the right hand side of the upright.

I think the ref had no other choice but to show Smith a red, regardless of whether it was accidental or not. You simply can't go near a players eyes. If you want to argue you it should of been a yellow you can but given that it happened with just 8 minutes to play it would of not made much difference.

Also this was the same player who in all probability bit a Munster player in the same season and avoided a ban so I'm not really sympathetic to him at this point.

On the balance of play I think its fair to say that you wouldn't of begrudged either team of a win today. The ref wasn't great but in the first half I think he made poor decisions against both teams both overall Ulster got the rub of the green from the ref. I didn't see the Stormers-Ulster match earlier in the season but from what I've heard even the South African pundits agreed Ulster where robbed of a win by dubious decision. Had UIster won then, this game would of been played in Belfast and that may have been enough to see a different outcome to todays game.

Still was great game and great to see such a large crowd. Bodes really well for the future of the tournament.

as a Saffa,Im worried when two green teams are 1 and 2 in the competition,with the sharks a hair behind. I sincerely hope the non South African teams get stronger physically and get better,because being right at the top in one year seems far too easy and I worry about the quality of the opposition. Maybe this is what happens when you take jetlag out of super rugby ? Saffa teams travell ing to Oz and Nz had hetcic jetlag and longer tours than nz and oz.

I must agree about the  squad  quoted by Rooinek and I think that Vermeulen has shown he is not the player he used to be in the WC.    Roos  was in fact the live wire in the Stormers team  being the ideal 8 from my perspective - linking up with the backline is an ideal situation when it comes to any number 8 and Roos seems to be in that category, while Vermeulen showed noting at all playing for Ulster.

I  have not seen any rugby played by Willie le Roux this year at all - but I would prefer to see Gelant at full back to him.   So here is my team against  Wales:-

Well done to both the Bulls and Stormers players...staatmakers.

Bad luck to the gallant Irish sides who indeed never disgraced themselves..

No Vermeulen, what a surprise to see a clean parting, w ith a few exceptions it's  pretty good squad.

What has happened to old rooitwit.   Supporting the Mighty Stormers!! W hatever next! Maybe he will recant of his evolution BS !!

Thor is going for a knee operation .

Going for a knee operation at the age of 35  would require an absence of circa 6 months from playing and by then he will take months if ever to overcome the problems relating to match-fitness.    I cannot see he can come back successfully to play for the Springboks.

At 35 yo, Deon Fourie is playing like a young Scalla...glad to see him included in the Bok squad...long overdue .

The WC will be Duane last outing I think, or maybe he retires this year already...although Fourie deserves it, it's a shame about youngsters like Butelezi and Thsituka.....also the choice of Koch over Wilco Louw is Stupid....Wilco is in Great form overseas and 1 of the best Tightheads in the World....but R&N has surprised me with 8 new caps....intresting now would be the Team choices for games....not that they make Benxh warmers out them again ( Like the Du preez Twins)....Roos must start before Wiese....the latter does not really actually deserve to be there.

If Pieter Stef is not completely fit yet, then start Elrigh Louw.....after all these new guys have mostly all played against top test players already in the URC.
You need to Log in to reply.